June Hobart was a Member of MSWPS from 1971 so will be well known to our older members.

June Hobart studied Fine Art in the studios of Archie and Amalie Colquhoun in Melbourne where she was influenced by the Meldrum tonal school. Juliet Peer’s writes in ‘More Than Just Gumtrees’ that Amalie ‘greatly encouraged June to put art before housework and not waste her energy as a young married woman.’ She exhibited at The Athenaeum Gallery in Collins Street, Melbourne in 1950 followed by a solo exhibition at the Georges Gallery in 1952. In 1952 and 1953 June traveled to Europe painting and studying in the Galleries. June Hobart was a member of the Victorian Artists Society and The Twenty Melbourne Painters where she was Honorary Secretary for twelve years. June was Vice President of the Melbourne Society of Women Painters and Sculptors in 1976/77.

Her exhibition organized by her daughter was a delight and shows her skills not only in portraiture but
in a range of subjects. Thanks to Robyn Pridham for providing photographs of this show for our website. 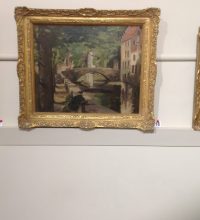 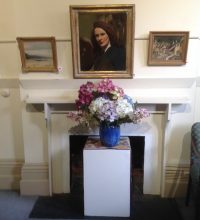 June Hobart Self Portrait at 21 Years. 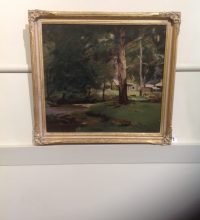