I have always been interested in creating art of some sort and I suppose have dabbled in some sort of creative process all my life.

In school I remember drawing of Spanish galleons – I used to love drawing the beautiful details of the raised stern, and billowing sails.

When I left school I enrolled in illustration at RMIT at night school. I finished two years doing it part time, during which time I remember doing some life drawing and painting from still life. However I did not finish the full course.

Throughout the eighties I enrolled in (night school) library course, and after work and before the sessions began, I filled in the time by attending short courses at Prahran TAFE in drawing and some painting.

I became very interested in Mosaics, ( I think it was the colour of the pieces which attracted me) then moved on to Pastel painting. I am still drawn to the beautiful pastels in art shops. However, I still loved drawing and drawing the human figure is always a joy and challenge.

On moving to Hawthorn, I joined Hawthorn Artists Society and began life drawing in earnest and soon discovered Yvonne Audette and have been doing life drawing with her ever since.

Later, I discovered Richard Birmingham’s classes in painting and became very interested and have been painting with him ever since.

I also like to attend workshops with artists whose work I admire: Heather Betts, Mark Dober.

I have moved away from realism in painting, and enjoy the challenge of creating beautiful and colourful abstract  paintings with no preconceived picture or outcome in mind.

However, I am a fairly analytical and logical person and am also attracted to patterns and shapes – finding the pattern or connecting the shapes and colours in the work.

My work is now mainly in Acrylic paint and charcoal drawing

I am a full member of MSWPS and have exhibited with them for at least five years. 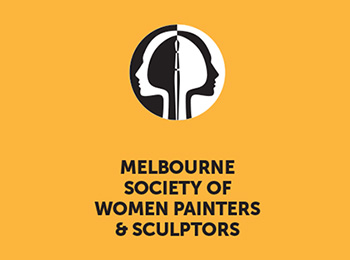 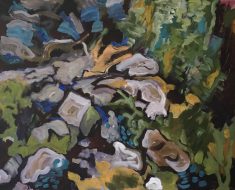 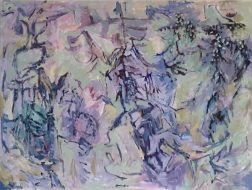 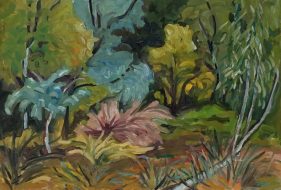 Composition in Blue Green and Yellow

Waterhole in the Bogong 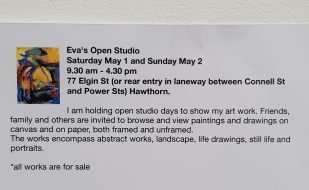