Janice McBride is a contemporary painter and printmaker, who is a regular exhibitor in Australia, occasional exhibitor internationally, in New Zeeland and London, UK. She has paintings and prints in both domestic and corporate collections. Her works are also in public places, and through her association with the Australian Print Workshop, she is represented in the National Galleries in Canberra and Melbourne, Australia.

Janice’s career spans a wide range of art practice, including Artist in residence and Theatre Designer, prestigiously designing costumes, makeup, album cover art and staging for Rock Opera in the Sydney Opera House in the !970s. She also worked on two television pilots for Polyglot Puppets, and for the Gardner Puppet Theater designing and making sets and promotional posters. Theatre. A Lecturer for many years at RMIT University in the 1990’s, Janice has continued to tutor at TAFE Colleges and the Council for Adult Education (CAE). Currently she runs a Painting class at the Hawthorn Artists Society.

Focused on figurative practice in her content, Janice employs diverse techniques in her art practice, ranging from Oil Painting through to Mono Printing, etching and experimentation with new Print making forms such as the creation of Solar Plates. Strangers when we met Linocut 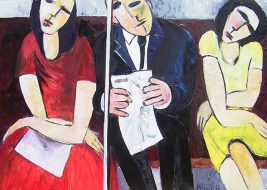 Strangers on a train Oil on canvas 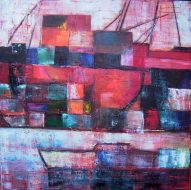 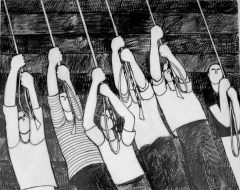 Pulling the back 10 Drawing on Drafting film

Pattern of the city Oil on Canvas 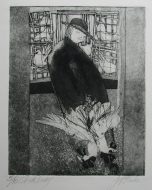