As an active member of both the Victorian Artists Society (VAS) and the Melbourne Society
of Women Painters and Sculptors (MSWPS) for nearly forty years, current members may
be interested to learn more about the irrepressible sculptor Carola Cohn. (Ola)
Ola Cohn cared deeply about people, art and animals and was generous with her talents,
time and money until her death in 1964. Her creativity and kindness has inspired children,
helped rehabilitate injured Second World War soldiers, improved conditions in hospitals
and assisted many charities in Melbourne and beyond. Her philanthropy benefited
thousands. Whether she was weaving scarves, teaching art, or opening her studio to help
raise money for various causes, she worked tirelessly for women, art and community.

She was President of the MSWPS from 1948 to 1964. Her bequest to the Council of Adult
Education of her East Melbourne home and studio has paved the way for many women
artists for over 50 years. The bequest also granted access for the MSWPS on Thursdays.
The house is not only historically important for its association with Ola Cohn and her
involvements with most of Melbourne’s art movements, but also for its social significance
in providing a venue to facilitate women’s art in Victoria. It is a lasting legacy for the
MSWPS which meets regularly at the Ola Cohn Centre as it is now known.

Born in Bendigo to an English mother and a wealthy brewer of Danish decent, her artistic
talents blossomed at Girton College, Bendigo School of Mines and Swinburne Technical
College Melbourne. Her local education prepared her well for the Royal College of Art,
London in 1926. There she studied sculpture under Henry Moore, won a studentship and
within three years, became an Associate of the Royal College of Art, London. She travelled
extensively in Europe, even visiting Iceland. During this time, she created and exhibited
early modernist sculptural works in stone, bronze, wood, plaster and clay. Ola’s bronze
Head of a Virgin, 1926, showing the influence of Henry Moore, was purchased by the NGV
in 1945.

Ola “treasured” her meeting with Queen Mary in London and in the 1930’s her gifts to
Princess Elizabeth and Princess Margaret of Fairy books she had written and illustrated
were acknowledged in the press. She also received a request from the office of the Prince
of Wales for a piece of her work to be included at an exhibition in aid of the British Legion.
On her return to Melbourne, she established a studio at Grosvenor Chambers, 9 Collins St
Melbourne, an early custom built complex of artists studios. It subsequently housed many
other notable Australian artists including Tom Roberts and Mirka Mora.
The Fairies’ Tree is Ola’s best known work. (1931-34) It brought sculpture off its pedestal
down to a level where it could capture the imagination of the little children who saw it at the
Fitzroy Gardens. The work was a gift from Ola “for the fairies and those who believe in
them”.

Attitudes change and according to Mark Holsworth in his article Oddities of Melbourne
March 12, 2011, included The Fairies’ Tree as a curiosity “disjointed from reality, the
detritus of history washed ashore in Melbourne”. In 2008, ABC radio described Ola Cohn
as “a big flour bag of a woman, healthy as bread, strong as a millstone’’. She may have
been overweight but it did not diminish her capabilities or her enthusiasm.
Ola carved large commissions in stone, free hand; The Curnow Memorial drinking
fountain, Bendigo,1938-39 and for the Hobart Hospital, two sandstone figures, Science
and Humanity, 1938. In Adelaide, her ‘Pioneer Women’s Memorial’, 1940-41, was carved
from a three ton piece of Waikerie limestone in 18 months! All these works attracted
controversy and derision. Enclosed in the pedestal of the Pioneer Women’s Memorial is a
time capsule detailing the deliberations of the design committee as well as messages for
women of the future. It is to be opened in 2036.
Although Ola had her detractors, she was undeterred. “Having spent my life studying
sculpture, it seems ludicrous to be upset by the opinions of people who have not” she
stated.

In 1952, she won the Crouch Prize for her wood carving Abraham. It is now displayed at
the Ballarat Art Gallery. Just after her death, at the age of 72, she was appointed Officer of
the British Empire for services rendered in the service of art, especially sculpture.
Ola Cohn’s tenacity and resilience shows that enduring works can be achieved in spite of
significant odds. Her story is an inspiration to many Australian artists and a great legacy to
current members of the VAS and the MSWPS. 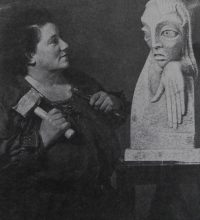 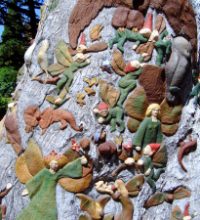 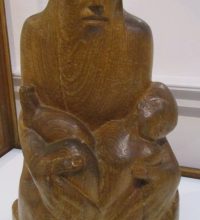 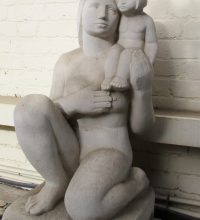