This exhibition illustrates what is happening both on land and deep within the ocean polluting matter that exists. Whether it is natural or man-made, with the images depicted I wish to bring to light the damage that may look beautiful, but is deadly for sea creatures and humans alike. 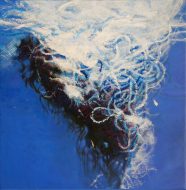 The fury of woman