MSWPS is pleased to announce that Amanda Hyatt has accepted the invitation to Judge the 111th Annual Exhibition.
Amanda is a tonal impressionist Alla Prima watercolourist, making every brushstroke matter, who also paints in oils. She believes that light and atmosphere are the key essentials for her art and doesn’t rely on colour.
She uses a reduced, more muted colour palette and makes tone ‘do all the work’ rather than letting ‘colour get all the glory’.
She has been described as a ‘Master Artist’ (Director of the Dalian Art Gallery,
China), one of the ‘top seven en plein air Masters’ (L’Art de L’Aquarelle) and “is now considered to be one of the most exciting and ground-breaking watercolour artists in the world” (APV Films 2019). 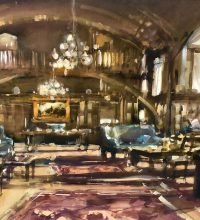 Inside the British Natural History Museum 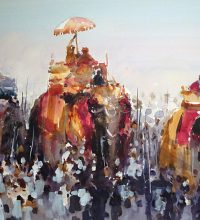