Maureen was a diverse and talented artist. She painted in oils, acrylics, watercolours, pastels, ink and collage. Maureen won over 50 awards in local exhibitions, including the Mabel Pryde Award which she won in 2002 and 2005. Maureen became a Life Member of the Melbourne Society of Women Painters and Sculptors (MSWPS). She joined MSWPS around the mid 1980’s and was on Committee for several years before becoming President in 2000.

Towards the end of her tenure as President of MSWPS, she became aware that the CAE had plans to sell The Ola Cohn Centre, which meant that our Society would have to find other premises. By this time I was elected President and together with a strong robust Committee, we decided to fight this, but we would need a legal help. Maureen’s daughter Jane was a lawyer, and directed us to an excellent solicitor who was happy to look after our interest’s pro-bono. Thankfully, Ola Cohn had stipulated in her Will that MSWPS be allowed to continue to use the premises free of charge in perpetuity. Thus the CAE and MSWPS formed an Advisory Committee to look after the premises of The Ola Cohn Centre for the Arts. Maureen, Judith Perry and myself represented MSWPS at this committee.

She also had a ‘keen eye’ for the decorative arts in which together with her husband John would buy, restore and resell. At her funeral her children recollected how at one time their home was filled with collections as they side stepped their way through the house. With permission from the family, I have consent to tell this story:

In 1982 Maureen purchased a box lot of paintings and frames from the auction house Leonard Joel, one painting had caught her eye. On returning home she thought the painting was the work of Eugene von Guérard however there was no signature. She decided to take it to the National Gallery of Victoria, and coincidently the leading expert on von Guérard, Frank McDonald was visiting the NGV, and took a look at the painting. He thought it looked promising and took it back to Sydney for further inspection and research. In 1983 Frank felt relative certain that the painting was a von Guérard and was prepared to attribute the painting to him. It was decided that the painting would be auctioned at Sotheby’s in Sydney with a reserve of $7,500. Unfortunately the painting did not sell and was passed in. The painting was returned and hung on the dining room wall for 31 years.

In 2017, the family home was being packed up for sale and Tony Phillips from Phillips Auction house was overseeing the antiques to be sold, when he spied ‘the painting’. Meanwhile another painting of von Guérard’s similar to Maureen’s, larger and signed had re-surfaced after 150 years missing, in North America and subsequently sold at Sotheby’s Sydney. It was ‘The Pinnacles, Cape Woolamai’. With this heightened interest in von Guérard, Philips auction house believed it would be a good time to sell. The family agreed to sell at reserve for $20,000 thinking it a little high. The painting sold for $160,000, the highest price a painting had sold at Philips Auctions. Maureen who was there, was congratulated for her ‘keen eye’.

Maureen was valued member of our Society. Thank you Maureen for your friendship, and your dedication towards MSWPS. 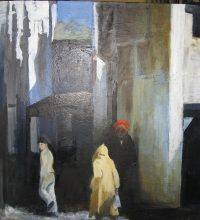